An Untraditional Twist
From tossing pies to reinventing Southern specialities

As a young apprentice, Chef Brett bounced through the ranks at different eateries and honed his skills. That journey brought him to The Plantation Club at The Landings, where he now helps coordinate the culinary side of nearly 100 weddings once the season hits—not to mention the annual $2 to $3 million in revenue the banquet events bring in.

Not too shabby. I had the chance to sit down with Chef Brett and learn how he made his way from tossing pies to perfecting Polish dishes to feeding hundreds his twist on regional Southern specialties.

Let’s start with your culinary journey. Tell me where your passion for the kitchen came from.

I’ve been in this game for a while! I worked in one or two restaurants before graduating high school, but it was nothing that I thought would go anywhere. I went to college for business, but then I needed a job and had already worked in a lot of restaurants around the Savannah area. I started out at a seafood place on Tybee Island and met a wonderful lady who actually turned my life around in the culinary scene. Her name was Teresa Baker, and she was probably the biggest inspiration for me up until Chef Sam [Brod]. She passed away a few years ago, but she got me moving and going and showed me a lot of Polish dishes—despite running a seafood restaurant!

I learned a lot about her heritage and how she learned to cook. From there, I bounced around until a buddy of mine needed me to run a pizza place for him called Bambino’s. When they closed, I needed another job and luckily got the call from The Landings and came there as a pizza chef! I’ve been moving and shaking and learning new things every day.

So, you came to The Landings as the pizza boy! And now it’s 11 years later. How did you move up in the ranks?

I started out as the pizza chef for about three years and then went to the a la carte line, came back to pizza once again, then back to the line. And then when Chef Sam came, he put me on as Sous Chef and from there, I’ve been grinding it out and doing the best I can! And now I’m the Banquet Chef. Hopefully there are bigger and better things for me to come as well. I want to give my twist on the fan favorites. Especially for the weddings. We want to be as high-end as we can, and then play with it and give it our own little flavor.

I interviewed The Landings’ Executive Chef Sam Brod, who you mentioned earlier, for our Chef’s Corner piece last year. How has he helped to mentor you?

Chef Sam has taught me so much about the fundamentals and about different ways of doing things with fresh ingredients. It’s been a lot of fun, and he’s given me a lot of leadership and inspiration. Besides Teresa, Chef Sam has been my biggest mentor in the game so far. I just caught on, I love it, and now it’s life. I don’t see myself doing anything else.

Did starting out as a pizza chef influence your cooking style? Any Italian culinary background there or did it just fall into your lap?

I really began in the pizza world at Bambino’s and then coming here, I got a little more involved in writing the menus myself and figuring out what the members really liked. I do enjoy Italian food. A lot of the members really love it and it’s on a lot of our banquet menus. Pizza was really fun for me for a few years, but I wanted to move up and see what I could push myself to do.

After being exposed to so many different culinary landscapes, how would you pinpoint the personality of your cooking style?

I don’t know if I would give myself a style. I enjoy trying something different. I don’t like to do the same thing twice—at least as much as I can help it. A little twist on this, a little twist on that, and then I like to see the reaction of the membership. We have an abundance of fresh produce in the area, so playing with that is definitely my style. The fresher—the better, and I want to put my own twist and my crew’s twist on it.

Are there any staple items on your banquet menus that always seem to be in high demand and that will most likely stick around?

We have a Shrimp and Grits we do here that everybody loves—especially when it comes to the summer. Our Bistro Steak is also right there in the middle as far as a price point and people love it so it stays around. Filet mignons and lobster tails, too. Those will always hang around. And of course, salmon is always a big hit no matter where you go. I’ve grown more partial to flounder and sea bass. Those get me going! But it’s all about what the members like, so the salmon will never go away.

Other than seasonality and the bounty of ingredients Savannah has to offer, what inspires you to change around a menu? Reading cookbooks, watching food programs, traveling?

I enjoy watching culinary shows, but I’m not big on Top Chef or competition shows where it’s a lot of one-on-one. I like Discovery Channel-type shows where they feature the local cuisine. I like thinking of how I can correlate it to what we’re doing here in our region. Chef Sam is very knowledgeable on cookbooks, and I’m big into them as well. We have an abundance of them here. We just love to try something different that someone’s never done before. It’s always fun to try to wow the membership and get something on their palate that they’ve never had. We try to do something crazy every once in a while.

Give me some examples of this craziness you speak of.

We have a lot of wine dinners here, and Chef Kevin gets really creative. He’s loving the foams right now and the lace crackers! That plays into a lot of what we do around here.

I’ve gotta ask. How do you put a different twist on something every Southern restaurant does like shrimp and grits?

For Chef Kevin, it’s preparing the grits and then cooling them into more of a cake. For me, it’s trying a different flavor profile every time. I’ve used orange juice and some different preserves that we have on hand here. Most people think of shrimp and grits as Cajun spices, but I try to add in a little sweetness.

Savannah is overflowing with fresh, regional ingredients. Do you have any favorites to work with that you feel are a great example of what the land has to offer?

I really love working with the radishes that we have around this area. And especially in the winter—the turnips and rutabaga are phenomenal.

When you come home at the end of a long day, what’s your favorite comfort food to whip up?

I have a family at home, and we love chicken alfredo and chicken parmesan. We also all love steak—so a nice New York strip, some mashed potatoes, and macaroni and cheese is always good for us.

For those home cooks who are intimidated by the kitchen but still want to attempt an impressive meal, what’s your best advice?

Have fun with it! Try and do different things because you’re not going to get it right every time. Don’t take it too seriously. You might not even be able to duplicate something great, but for that one dish that you made that worked out—it might change your life and you might be able to change somebody else’s life as well. 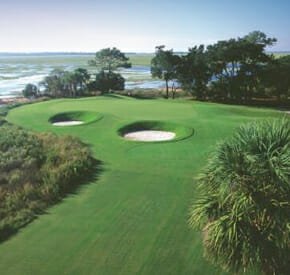 The Landings on Skidaway Island is a private gated community known as much for its beauty as for its personality. Located on the Intracoastal Waterway and just 12 miles from the charming and historic city of Savannah, GA, The Landings celebrated its 40th anniversary in 2012. Read More...
Your Information Request for your selected properties
DON’T MISS OUT!
Subscribe To Newsletter
Be the first to get latest updates and exclusive content straight to your email inbox.
Give it a try, you can unsubscribe anytime.